Hooke’s Law states that the force applied to a material is proportional to the extension, up until the elastic limit is reached and the material becomes deformed.

Therefore doubling the force applied to the material will in turn double the extension of the material up to the elastic limit, beyond this point Hooke’s Law no longer applies.

The results gained from the experiment should show a linear relationship between the force applied and the extension of the material up to the fracture point of the material at which it will become deformed, the graph of the results after this point will show this with a non-linear pattern.

F = Force acting on the spring.

ΔL = extension of material from its original length

k = is known as the spring constant, this is the Young’s Modulus of a certain material.

K is the gradient of the line found from the graph of force (stress) plotted against extension (strain) the greater the value of k or (Young’s Modulus E), the stiffer the material. (Bird, J. Ross, C. 2012)

Elasticity in physics refers to the property of a material that makes it possible to change its length, volume, or shape when a force is applied and then return to its original form once the force is removed. (Ologies & -Isms.2008)

When a force is applied to a material it will be put under stress.

Strain doesn’t have a specific unit but is sometimes given a percentage value to show how the force has extended the object.

Hooke’s Law shows the relationship between the stress applied to a material, the materials extension and the material’s ability to regain its original state. This is shown by the elastic limit of the stress-strain graph being linearly proportional.

Also referred to as K – spring constant of Hooke’s Law

Young’s modulus is the stress of an object divided by the strain of the same object; this is the gradient of the graph within the elastic limit.

Generally the greater the Young’s modulus the stiffer the material, meaning it will stretch less when a given force is applied. (www.funtrivia.com)

This graph shows where Hooke’s Law applies up to, also the other stages of a material under force, the yield is when a slight increase in stress above the elastic limit will result in permanent deformation, the material then hardens after this point up to ultimate strength where the material then begins to stretch and reduce the cross-sectional area until fracture point which is where the material would break. (www.esm.psu.edu)

This is a good source of information to explain and show the stages of deformation of a steel bar: http://www.esm.psu.edu/courses/emch13d/design/animation/Fnecking.html
(Date accessed 06/11/2012) 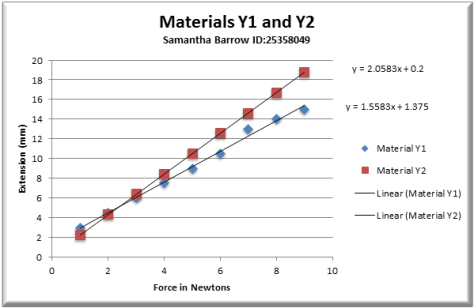 Fig 1: Results for Y1 and Y2 (Extensions) plotted against X (Force in Newton’s), the data shown in the graph represents two materials within their elastic limit obeying Hooke’s Law.

Fig 2: The data shows a material that has gone past its point of elasticity and has reached permanent deformation in its plastic region.

Materials y1 and y2 are within their elastic limit as shown by a straight line on the graph of the results plotted against one another; the force applied is proportional to extension of the material.

As this graph is plotted extension against force, the opposite is true for the gradient, the steeper the gradient the more elastic the material. The lower the slope of the line the stiffer the material, as the force is increased the extension is less.

Material Y2 extends 18.72mm under 9 Newton’s of force and Y1 only extends 15mm under the same force. This shows that Y2 is more elastic than Y1.

At the point of intersection between the two plotted lines shows that when a force of 2.35N is applied to both materials the extension is the same for both materials 5.04mm

The points of material Y1 defer from the trend line at around 7 newton’s this could show that the material is starting to deform and not return to its original state from this point, or the weights may have been drops on to one another causing extra force and extra extension of the material.

The results from the graph of Material Z show an exponential curve, with no linear values to give a proportional elastic extension, this could mean that the material is a type of rubber as rubber does not obey Hooke’s Law and gives a graph similar to these results. This could also be true as the deformation is very large compared to the force applied, more elastic materials will extend greater under less force. The results also show that the material has become permanently deformed and is heading towards fracture point.

WordPress.com is excited to announce our newest offering: a course just for beginning bloggers where you’ll learn everything you need to know about blogging from the most trusted experts in the industry. We have helped millions of blogs get up and running, we know what works, and we want you to to know everything we know. This course provides all the fundamental skills and inspiration you need to get your blog started, an interactive community forum, and content updated annually.

Welcome to WordPress.com! This is your very first post. Click the Edit link to modify or delete it, or start a new post. If you like, use this post to tell readers why you started this blog and what you plan to do with it.

This WordPress.com site is the cat’s pajamas